Hotel Proposal was rejected on Thursday. 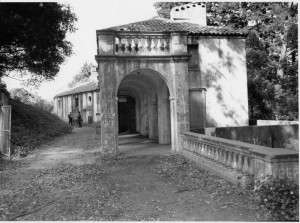 “Essentially, it’s a stabilization and preservation project,” Community Development Director Derek Johnson said. “We’d board up the doors and windows, rebuild the roof, add security lighting, secure the stairway and do significant landscape cleanup and pathway repair. We can start in two to three months.”

The council approved $1 million for the project, about $450,000 of which is estimated for the mothballing.

“I would probably characterize it as mothballing with park,” said City Manager Jamie Goldstein. “To the extent feasible, it’s repairing and maintaining what’s already there.”

Vice Mayor Michael Termini said, “The end game is basically a public park. We can protect its Stonehenge-like quality. We can make it attractive, rehab the fountain, get the wall down. We can make this a pretty pleasant place.”

The first phase of the hotel project included renovating the existing building into a nine-room hotel done in the style of the original 1922 mansion, with gardens and water features. The project, which would have begun construction within five months, also set aside 10 acres as a sensitive habitat for the Monarch Butterflies.

“What we are presenting to you is a private-public joint venture, said Jesse Nickell, vice president of Barry Swenson Builders. The city will own the property forever. It’s your investment.”

The second phase would have added 16 rooms and been completed by 2021.

Rispin LLC asked the council for $2.3 million—a $1.2 million grant and a $1.1 million loan from the city’s redevelopment agency for the first phase of the project,
promising a generated return of $130,000 a year to fund future city projects.

The developers would have put up $500,000 of their own and another $1 million from a Bank of the West loan.

“As a steward of public funds, I have great concerns about entering into the hotel business,” said Councilman Sam Storey. “I just don’t see the returns.”

Local residents spoke vehemently against the developer’s proposal, calling it an “ill-conceived business venture,” but others expressed concerns over safety and crime prevention on the property.

The council approved ample security lighting, taking down the wall and allowing police cars to drive onto the site, because the steep incline makes it difficult to patrol from Wharf Road.

The Rispin Mansion, built in 1921 by Henry Allen Rispin, was added to the National Register of Historic Places in 1991 and has been vacant since 1959. The city has owned it for 26 years.

“Rispin lives on. It doesn’t die,” said Mayor Dennis Norton. “Every year we’ll be talking about this. There will always be ideas about what somebody can do with this mansion.”